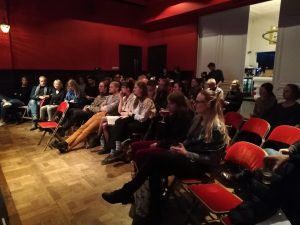 There is a limited amount of seats, so please rsvp to info@gastatelierleo13.nl to make a reservation.

Gastatelier Leo XIII is an Artist-in-Residence programme that offers (young) artists the opportunity to develop their work and artistry over a period of four months. This year Leo XIII celebrates its 20th anniversary: a good moment to reflect upon the past, and even more so: to look forward to the future.

To re-think our position in the field we asked Liza Voetman to do a four month research into our programme. In her research, ‘hospitality’ came to the core as a central issue, based on the relationship between the invited guest artist, their autonomy and the guest- and host seen from the perspective of the public, organization and artist themselves. Parallel to this research, two pairs of artists worked in the physical space of the guest studio, in order to research and experience the theme both in a theoretical and practical way. The main question that came up regarding hospitality can be summarized as such: as a host, do you hand over the keys and give the artist the ultimate freedom? Is that a sign of trust that the artist will do whatever is necessary? Or would just handing over the keys be almost the opposite, a gesture of non-commitment from the side of the host? Of not taking care of the artist and just leaving them to their own devices? So first of all what does hospitality mean for a small artist-in-residence as ours?

But by thinking further, we also asked: what does a notion like hospitality mean in a broader, political context? What does hospitality mean regarding, for instance, the refugee crisis? Hospitality in a curatorial situation is one that, according to Beatrice von Bismarck and Benjamin Meyer-Krahmer, ‘implies invitations – to artists, artworks, curators, audiences, and institutions; it receives, welcomes, and temporarily brings people and objects together, some of which have left their habitual surroundings and find themselves in the process of relocation in the sense of being a guest.’ ‘It offers resources to satisfy very different kinds of needs, gives material and physical support, but also responds to a need for recognition, respect, or attention.’ So the first connotations to ‘hospitality’ are normally very positive ones, it conjures mostly to a position of generosity that takes the interests of audiences, artists, and works as guests into consideration. This stems from an idea of unconditional hospitality of the kind Jacques Derrida calls for in Of Hospitality. An update of the open concept of accommodating all those who travel. Understood as an anthropological, fundamental right. But when we apply this concept to the current socio-political situation, we might see another side of hospitality, reflecting key topics evoked in discussions concerning the current migrant situation: the conditions along the borders and accommodations for refugees, including issues of de-contextualization, displacement, and rootlessness, encounters with the foreign and foreign people, the satisfaction of basic human needs, and processes of access restriction, inclusion, and exclusion.

In December 2012 an eponymous conference was held at the Hochschule fur Grafik und Buchkunst (HGB) / Academy of Fine Arts Leipzig around this theme of hospitality. And in 2016, Sternberg published a book stemming from this conference, collecting texts from the different contributors. For this mini-symposium we drew heavy on this book. And two of it’s contributors – Maja Ćirić and Lorenzo Fusi – are also involved in this symposium. But we hope to add a next chapter to this topic. How did hospitality evolve in the years from 2012 on? What does the notion mean now the refugee crisis seems to go on without end? And what can the notion of hospitality mean for a (small) space like Leo XIII, or for spaces that resemble a place like ours?

Taking social-political arguments into account, would we want to get rid of the concept of hospitality completely, as Lorenzo Fusi will plea? Or will there be an alternative in what Maja Ćirić calls ‘internalized hospitality’? What was the experience of Emily Huurdeman as an artist during her two month stay in the residency while this research was done? And what can Esther Schaminée contribute to this discussion as an artist?